Make no mistake: culture and ethics are led from the top 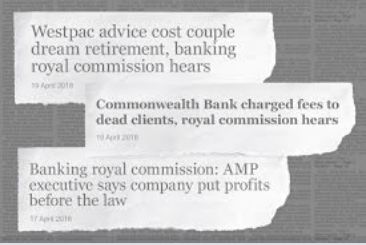 The royal commission revealed unethical practices and behaviours in the financial sector that are associated with the culture of the specific organisations. These practices are indeed part of the organisational culture, but culture should not be blamed. Culture is not an entity, nor an act of misconduct by individuals who find a loophole in the system. Culture and ethics are a consequence of leadership. Leadership starts from the top. In this article, I would like to discuss what culture is and why it is the failure of the top leadership (board and top management), rather than of individual employees.

Culture influences the way team members think and behave-  as such, it is difficult to quantify the culture into a report, or to precisely measure it in a survey. For non-executive directors to know what is happening on the floor, they need to be present and not rely on the top management written and verbal reports. Going down a few levels in the hierarchy and engaging with the employees and middle management would allow the board of directors a better understanding of their organisations’ real culture.

Culture promotes what is “right“ and sanctions the “wrong“ behaviours– “Wrong” behaviours that are not sanctioned are interpreted by the teams as acceptable conducts and become part of the culture. This is how organisations develop cultures of bullying and sexual harassment. It is when the top management turns a blind eye to behaviours that should have been perceived as unacceptable that these conducts become part of the culture. Hence, when CBA, for example, decided to ignore the activation of thousands of Youthsaver accounts by staff members, using their own money or taking it from the bank, the management should have expected for other unethical behaviours to flourish in their bank. Once unethical behaviours are approved, the door is then opened to other immoral practices to thrive. The reason for this is simple:

Culture is part of the “sense-making“ process that helps employees interpret what is going on in the organisation and how to behave– We all have our values and ethical standards. Still, success and promotion in the workplace mean playing according to the organisational rules. The culture helps us interpret how to act and achieve our goals (and KPIs). Some employees prefer to move to different employers, rather than behave in a way they feel is not right, that is against their values and ethics. But what can they do when the common practices and standards of the industry are unethical? In June 2017, the Company Directors Journal reported the results of a global survey of financial services executives conducted by Economist Intelligence Unit in 2013. The survey found that 53 per cent of the respondents believe that career progression at their firms would be difficult without being flexible on ethical standards. Approximately the same number thinks that being rigid on ethical standards would cause their firms to be less competitive. Only 37 per cent stated that being ethical would provide better financial results.

The national culture influences organisational culture it operates within– And here is where I am pessimistic and optimistic at the same time. The way the Australian media and society treated the AMP board is a reflection of gender inequality in Australian society. There is no connection between the performance of the then Chairperson of AMP and her being a woman and a mother. There is no correlation between the performance of the individual board members and gender as well. Yet, only female board members have resigned from the AMP board, and the question that was asked at the AGM about recruitment according to gender or competencies is a major red flag. This is a sad reflection that despite all the changes and efforts for gender equality, we are still far from where we should be as a society.

My optimism comes from seeing some social changes, including those that called for the royal commission enquiry to take place. Similar to the “#metoo“ movement, where sexual harassment was the culture of the entertainment industry, I believe that the Australian society is going through a cultural change and the tolerance towards unethical behaviours such as those that were revealed by the royal commission is dramatically decreasing.

The role of organisational culture is to protect the organisation from changes– Culture often is portrayed as acting as the immune system of the body, protecting it from external influences and changes. This is the reason behind the failures of many organisational changes, such as mergers and acquisitions, joint ventures and transformations. In other words, the banks and other financial institutions are heading towards challenging times. The real challenge of the banks’ leadership will not be in focusing on the relatively easy tasks of changing processes, procedures, KPIs and bonus systems. The challenging task will be to implement a new culture that is based on ethical decision making and behaviours. A culture that will allow employees to ask themselves in every given decision: “Is this the right thing to do?” and know the right answer and that the wrong behaviour will have unfavourable consequences for them.

So, let’s pay attention to this critical question that is not asked often enough in the boardroom: “is the right thing to do?”. Remember that every decision we make, including the decision not to make a decision has ethical implications. Furthermore, organisations have stakeholders, not only shareholders. Doing the right thing refers to the stakeholders- the customers, the community, the society, the environment, the employees and their families, the weak and the poor- not just to the profit of the organisation and the benefit of the shareholders. The royal commission revealed that this question and the stakeholders were forgotten.

Last but not least, culture, this “fluffy” concept is shaped and modelled by the board and top management. It does not evolve in a void and cannot be accountable for faults and unethical conduct. Complacency, for example, cannot occur on the floor when the board and top management send messages of worry and angst. Management proactively leads and shapes the culture, and when the culture goes wrong, they take accountability and are responsible for developing and implementing a cultural change. Regaining public trust starts with taking responsibility and acting ethically.